Alternative energy, such as solar power often needs to be stored in batteries because the power is generated at times when we don’t need it.  The same is true to some extent for wind power as well as hydro.

The most cost effective, practical way of storing electrical energy at this time for home use is using lead acid batteries.  But unfortunately, while the basic chemistry remains the same, lead acid batteries are available in a very wide range of models and prices.  Some batteries can literally cost three or four times for the same basic rating.

Without writing a novel on the various different technologies employed in modern lead acid batteries, one can sum up the basic differences by simultaneously considering two technical parameters and comparing that to the price.

The function of a battery is to store energy.  How much energy it can store is obviously an important factor to consider when comparing differently priced batteries.

All batteries will be rated in terms of an Ah (Amp hour) rating.  This is a somewhat less than useful measure, even though it is widely adopted, because you can’t directly compare all batteries using this figure alone.

The other important thing to know about any battery is how many cycles it can endure at a given depth of discharge.   This information is not always readily available, but the better battery manufacturers sometimes publish a chart like the one below: 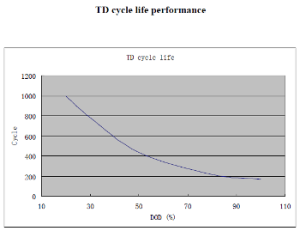 This information will often explain why one battery costs a lot more than another, when they both have the same energy storage rating.

Obviously these charts are plotted using ideal conditions for each battery.  Battery temperature is one of the most important variables affecting their performance.  Most batteries need to be kept nice and cool (20C is often quoted).  Again, the more expensive batteries can sometimes perform well over a much wider range of temperatures.

So if we combine these two crucial battery attributes, we are in a position to compare apples with apples (at least to a basic extent).

To do that, I suggest using this formula:

This will give a figure in Rand per kWh Cycles which you can compare directly between batteries.  It should show which battery is effectively the cheapest over the long run (provided you can believe the published specifications).  We would recommend that you choose the same depth of discharge (DOD) when comparing different batteries.  50% DOD is probably a good starting point to compare different batteries because that is a reasonably deep level of discharge, one should not routinely go deeper than that with most deep cycle batteries.

An example of using this metric would be as follows:

If we use the standby battery whose cycle chart is shown above, its price, at the time of writing this article, is R2700 excl.

If we compare that to the specs of the OmniPower 120Ah listed on this website:

Another example would be the 100Ah Lead Crystal Battery:

We Can Now Compare Differently Priced, and Sized Batteries

Provided you use the same depth of discharge data (for example 50%) you can now compare different batteries.  A battery with a lower BCPI should be cheaper to own over the long run, because it costs less per “kWh Cycle”, or to state the same thing in a different way, it offers more “kWh cycles” per Rand.

So maybe using this (somewhat simplistic) metric, it might now become a bit easier to make sense of the vast array of battery options out there?

The problem comes with the lower specification, cheaper batteries which typically do not have reliable published depth of discharge vs cycle life data.  Without that information, we can’t really compare.  It seems that in those cases, its back to the old premise of “you pays your money and you takes your chances”.

By calculating the BCPI at different depths of discharge for the same battery, you can use this index to try and estimate the most cost effective depth of discharge to choose for that particular battery.

So if we compare BCPI figures for the same battery at those different depths of discharge then we get:

So from the above it would seem that the most cost effective depth of discharge for this battery would be about 40-50%.

How to Compare Solar Batteries

5 thoughts on “How to Compare Solar Batteries”