Taking your entire home off the grid can be very expensive.  It also may mean a change in lifestyle because you are no longer connected to the almost infinite power of the Eskom grid.

In a solar or battery back-up power system, the power available becomes limited to the size of your system, which can also vary according to the sun’s daily cycle, as well as the weather, all of which may enforce some compromises on your lifestyle.

So  it may be more practical to only convert part of your home to solar.

Apart from the significantly lower system cost, this may also have the least impact on your lifestyle, because you still have access to the Eskom grid and its infinite power when you need that, while simultaneously enabling you to enjoy all the benefits of solar power. 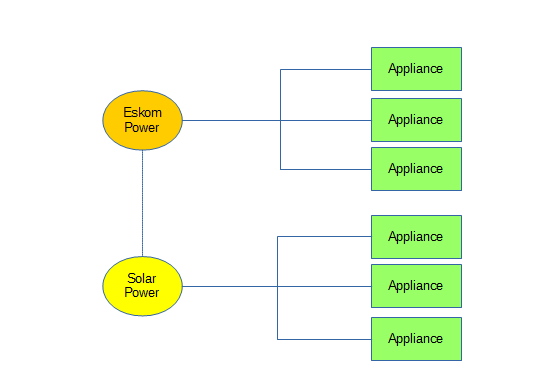 In the diagram above you will also see that the two sources of power (Eskom and Solar) may also be connected, represented by the line between the two power sources.  This is an optional link, which is not always present in all installations.   Its purpose is to allow Eskom power to charge batteries in a Solar system on cloudy days, as well as enable the export of solar power back onto the Eskom network, provided the solar system is capable of exporting power (you will need a grid-interactive inverter for that).

The important point to remember here is that all wires  (Live as well as Neutral and Earth) that supply solar power to selected appliances have to be completely separate from the equivalent wires supplying Eskom power to other appliances.

This can be very difficult to achieve in an existing home, where the circuits may have become quite convoluted over time, and/or alterations have been done. Especially if the wiring code was not properly adhered to, which is often the case.

Consequently this can require significant effort (and thus cost) to achieve.  Furthermore, it is often difficult to asses how much work is required to do this before starting, because one does not know what state the existing circuits are in until you start.  Electricians can sometimes be very reluctant to take this sort of work on, or alternatively they will quote quite high prices to protect themselves from all the unknowns that exist up front.

Please note that in the interests of providing an overview of what is required when converting part of your home to solar, the explanations and diagrams above have been simplified and do not  exhaustively cover all the safety issues and regulatory requirements in detail, some of which are covered in more detail in some of previous articles (see reference box on the left).  If you intend to undertake this type of project, please ensure that all changes you may decide upon adhere to all relevant codes and standards and that you obtain a COC from a competent electrician once completed.

One relatively clean/simple way of achieving the separation of circuits is to do it by separating the breakers on your DB board.

If you look at your DB board in your home you will see a main switch as well as an earth leakage switch/breaker, and then next to those will be a whole row of other breakers. 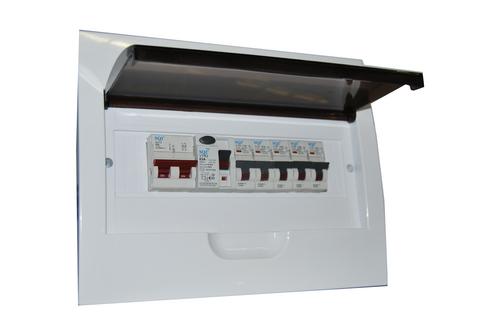 Those other breakers are current limiting breakers which feed all the various appliances in your home.

An easy way to separate the circuits for solar or battery power is to convert a single breaker at a time, with all of its attached appliances, to solar or battery power.  This means much less work and thus much lower installation costs, because apart from re-wiring the breaker (including the associated Neutral and Earth Wires), no other wiring needs to be redone, provided that breaker was correctly installed originally.

The diagram below illustrates this concept. 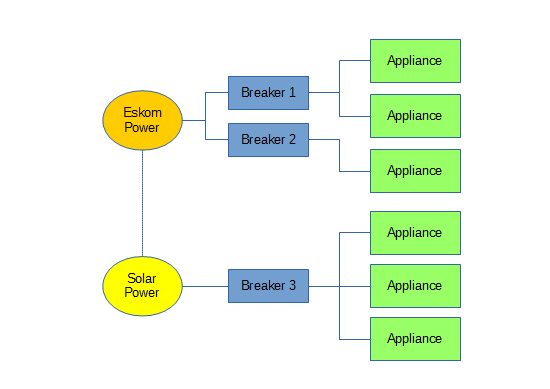 As you can see in this example, Breaker 3 has been converted to solar power and thus all appliances connected to Breaker 3 become separate from the other circuits in the house (provided that breaker and all its connected appliances were originally wired correctly according to the wiring code).  Please note that you need to separate the Neutral and Earth wires as well as the Live wire for that breaker.  There can be no interconnection of Live, Neutral or Earth wires between Eskom vs Solar powered circuits after the branch.

But how do you know which breakers feed which appliances?

Its usually relatively easy to find out.  Just switch on all appliances in your home, and then switch off each breaker, one at a time, to see which appliances go off.  Make a note of which breakers are thus feeding which appliances.

You then need to decide which breakers should be powered by solar or battery power, and which should remain on Eskom power.

Your choice might also be based on which appliances you would still like to work in the event of an Eskom power failure/interruption.

Another benefit of this approach of converting various breakers to solar power is that it enables a scaled, incremental approach.  You need not convert your whole home at once.  You can do the conversion to solar power one breaker at a time, to suit your appetite for solar power as well as your budget.  Once you have the basic solar power infrastructure installed, it becomes quite easy to convert an additional breaker to solar power later on.

Once you have selected which breakers you want to convert to solar power, you can proceed onto the next step, which is analysing the daily energy consumption of the appliances connected to each breaker.

Please note that any plug point that is converted to solar power becomes limited by the size of the inverter.  This means that the plug point will only be able supply a limited amount of power before the inverter becomes overloaded, depending on the size and protection circuits of the inverter.  This may have implications with regard to which plugs you can used for vacuum cleaners, hair dryers etc.  This means that you need to identify which plug points are connected to which breakers in the DB board because that will be relevant to your choice of which breakers should be converted to solar/battery power.

The single most important thing you need to know to be able work out the size of the solar system required, is the combined daily energy consumption (kWh) of the appliances that will be converted to solar power.

The second most important thing to know is how that consumption is spread out over the day.  The sun is only available to supply power from about 09:30 to 14:30 each day.  Energy needed outside of that period will have to be stored in batteries.

We can help you do this analysis if you provide us with the following information:

Please download our spreadsheet that will help you record this information by clicking here.  Please email the completed sheet to us when you are ready.

Alternatively you can attach data logging energy meters to each breaker and let them run for a representative period to gather the data.

From that information we will be able to specify a suitable solar or battery back-up system that suits your needs.